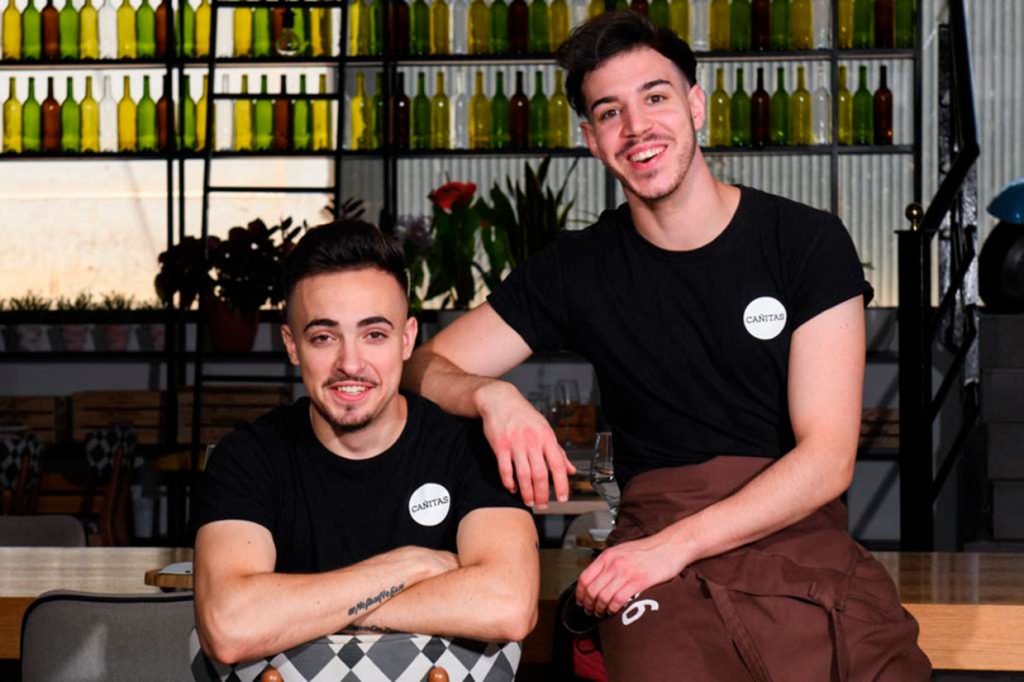 Cañitas Maite, the rise to the stars of two Gasma alumni

Former students of the Master’s Degree in Gastronomy and Culinary Management, opt for the Cook Revelation award in Madrid Fusion 2021

If you live in Spain and follow the gastronomic news, surely the restaurant Cañitas Maite is familiar to you. During the last months its name is a regular in reference media such as El Mundo, La Vanguardia or El Diario and on specialized websites such as Gastroactitud. Behind this restaurant of family tradition are Javi Sanz and Juan Sahuquillo, very young alumni of the Master’s Degree in Gastronomy and Culinary Management of Gasma. But there’s more. Javi and Juan are among the candidates for the Chef Revelation award of Madrid Fusion 2021 and the newspaper Expansión names them among chefs under 30 years of age whose track to follow.

ll this has been achieved in record time, with a pandemic of means that has made things very difficult for the sector, with a team whose average age is around 21 years and from Casas Ibáñez, a town of less than 5,000 inhabitants located in La Manchuela (province of Albacete). Javi and Juan are into challenges. Asked about how they are living this media boom; their comments distill naturalness: “It is true that we work three more hours a day. Now we notice that we are in the spotlight, so we have less margin for error, and we cannot afford failures,” explains Javi Sanz.

For Juan and Javi this success has no secrets: “We are here thanks to a lot of work and a lot of sacrifice, to devote time to reflection, to sit down to see how we can give another twist to everything we do”, confesses Juan Sahuquillo. For Javi, success is also due to having a very clear roadmap from the beginning. No wonder if we take into account that they have practically been raised between stoves.

It was five years ago that Javi and Juan, childhood friends, began to take on more responsibilities and give a more personal touch to the gastronomic section of the hotel-restaurant Cañitas Maite, owned by Javi’s family. Among stockings have been formed in centers such as Gasma, combining study and work: “On weekdays we were in Castellón attending the Master’s degree and at the weekend we came home to work”.

A stop and a new path

As they gained knowledge, their cuisine evolved. In this sense, they confess that their time in the Master’s Degree in Gastronomy of Gasma, thanks to a scholarship granted by Cervezas Ambar, was decisive. And it was not only because of the techniques learned, but because it helped them define, even more, their path.  “The Master’s Degree was an amazing experience to grow on a professional level. It gave us the opportunity to learn many things, but above all, to be in touch every day with great chefs who give you their vision and explain how to get there and stay,” says Juan.

On the same line, Javi highlights the proximity as one of the great advantages of Gasma. “The Master’s Degree gives you the opportunity to train with the best chefs and in small groups. Learn from people like Nacho Manzano, part of the Mugaritz team… with total closeness.” That closeness is what makes it possible for the relationship to be maintained even after the program, generating a lifelong networking: “The chefs who came opened up a lot. With some we still have a relationship, we have asked them doubts and we have gone to eat at home.”

This apprenticeship with some of spain’s great chefs helped them focus their gastronomic story: “The Master also helped us to be clear that, as cooks, you have to have a very marked, different personality”, they explain. Somehow he confirmed that the path they had started a few years ago was right: “We were clear that we had to do something recognizable, work radically the environment, kilometer 0, use ancestral techniques…”.

Before returning ‘home’, however, Juan and Javi took advantage of the Master’s internships to continue learning in some of the best restaurants in Spain: “We want to thank Gasma and, above all, Pablo Marquez (gastronomic advisor), everything they did for us”, they say. Javi recalls that “it was he who convinced me to do the internship at Casa Marcial, since the style of Nacho Manzano and his gastronomic proposal were perfect for our project”. Similarly, Juan appreciates that “he helped me get into Mugaritz when the applications were already closed. Working there put a lot of pressure on the start, but it’s the best experience I’ve ever had.”

The moment of truth

With the knowledge acquired during the Master’s Degree, after phoating in prestigious restaurants and finally, with time necessary, it was time to revolutionize the cuisine of Cañitas Maite. “Every step we’ve taken in our career has been to come back here,” they sentence. So, it was at the end of 2019 that they really started a gastronomic project that has not stopped growing.

Currently, in Cañitas Maite there are two gastronomic offers, one of bar, more informal and in which they introduce more avant-garde techniques, and another more seated, in which excellence in the product is the one that guides the course: “The bar allows us to offer an original cuisine that everyone can repeat, while at the table we propose something that until now did not exist in Albacete. Today, we serve 85 cutlery daily between the two proposals that can even be combined,” explains Javi Sanz.

Candidate for Best Croquette in the World

By the way, among the proposals of the bar format is a ham croquette with which they will be eligible next year for the award for the Best Croquette in the World in Madrid Fusion: “We use Joselito ham and products from the environment, both fresh sheep’s milk and butter are made here”. The croquette is completed with a suflated Joselito bacon that serves as a base: “We don’t lie if we say we’ve done between 80 and 90 tests, but critics loved it,” says Juan.

Part of its success lies in having been able to adapt the proposal to the circumstances. Thus, during the confinement they began to offer a take away service that combines rice – with very personal proposals – at noon and the author’s burgers – with Galician blond beef and maturations that exceed 800 days – at night.

As if that was not enough, they are finalizing the vinea project, a small gastronomic in which the environment will work even more: “This proposal will focus on the brutality of the Manchuela and allow us to offer a much more personal version of our kitchen”. The project is in its final phase, although, without haste, they hope to be able to open with all the guarantees next spring.

With a new restaurant ready, Javi and Juan have already embarked on their next project in neighboring Alcalá de Júcar, considered one of the most beautiful villages in Spain. Without revealing many details, they claim that it will be the jewel of the crown, that it will combine a gastronomic restaurant with a small hotel and that you will see the light within 3 or 4 years.

From Gasma, we wish all the luck in the world to two young chefs who have shown that age is not a problem to break molds when you have clear ideas and sufficient knowledge.