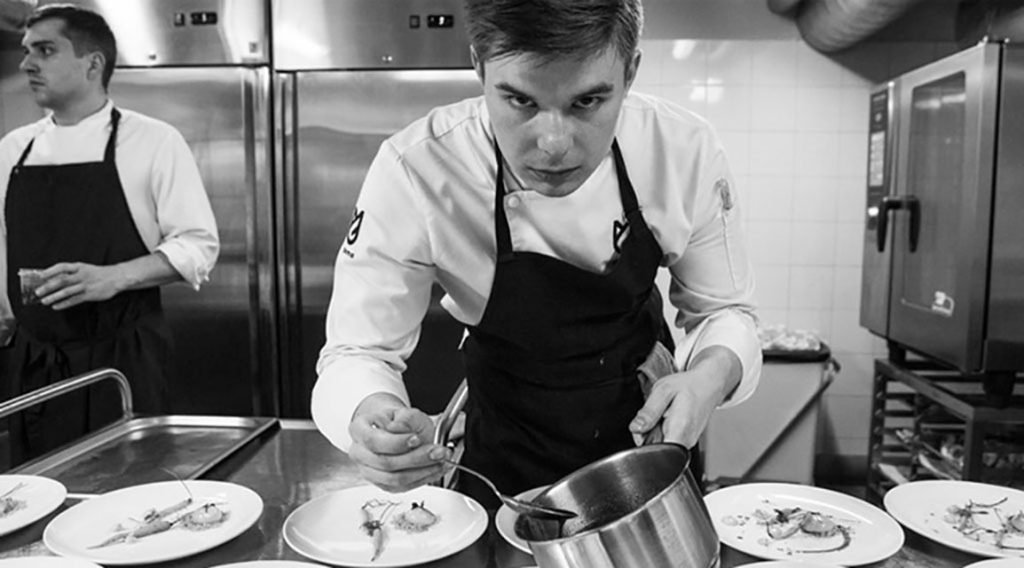 Tadas Eidukevičius , a student of the official Bachelor’s Degree in Gastronomy at CEU Cardenal Herrera University, features a tasting menu at Monte Pacis Restaurant in Lithuania.

Last March 4th Tadas Eidukevičius went back to the kitchen at Monte Pacis Restaurant in Kaunas (Lithuania). Somehow, he felt that the journey that he began in August 2015, when he decided to cross Europe and start studying the Official Degree in Gastronomy at CEU Cardenal Herrera University in Castellón, was coming to a full circle.  After months of training, Tadas returned home to put his name to a twelve dish tasting menu. From the Baltic to the Mediterranean.

Tadas is almost 20 years old and a first year student, but his experience in the kitchens goes far back. Back when he had almost no legal age to work. “When I was a child I wanted to become a lawyer but the gastronomic tradition has always been present in my family. I learned a lot from my mother and my grandmother.” Later in life, a movie would change his mind: “I remember I was watching the movie Toast and, somehow, something was activated. As soon as the movie was over, I started calling all the restaurants in the city. “

After being rejected in several places due to his lack of experience, Tadas started working at the Hotel-Restaurant Daugirdas in Kaunas, a benchmark reference in the city back then. “I started washing dishes and helping wherever I could. I earned only 70 cents per hour but it helped me get a lot of experience”. His next stop would be the Uoksas Restaurant, where he began to learn the basics of the contemporary Lithuanian cuisine that currently define his style. “People coming to the restaurant used to call it little Noma because of its cuisine”.

Monte Pacis Restaurant was his last stop before coming to Spain. Tadas worked there for a year and a half as Junior Sous Chef and learned a cuisine that originates in the French classicism and incorporates modern and fusion accents. Monte Pacis’ cuisine was respectful to the environment that nourished it (Actually, Tadas admits that one of the things he misses most when cooking in Spain is not being able to use the forest as a pantry).  Finally, he decided that it was time for further training, with a more academic perspective.

All the Way to Spain

After weighing the option of studying in Switzerland, Tadas Eidukevičius found in Gasma (Campus of Gastronomy and Culinary Management) the possibility of studying gastronomy through a Bachelor’s Degree: “I checked the Study Programme at UCH- CEU University and carefully looked at the trainer’s résumés “. The decision was taken. In late August 2015, Tadas came to Castellón: “Like most beginnings, it was difficult at first. On the one hand, I thought I could find a job because of my experience, but it was not that easy. In addition, everything was different: the environment, the culture, the language…”.

The way was paved quickly: “Gasma helped me from the very first moment. Besides, Castellón is a pleasant city and makes you feel very safe” says Tadas. The characteristics of the surroundings were also a nice addition: “Here we have our own garden and are in contact with small local suppliers. That was very important in the last restaurant where I worked at and it is also present in my cuisine”. Tadas was soon exposed to Spanish cuisine. “A few days after coming to Gasma I took part in an event and worked with Chef Rodrigo de la Calle”. In fact, Tadas believes that getting to work with great chefs is one of the most positive aspects of his first months as a Gastronomy student. “As students, we have already attended Masterclasses with Michelin starred chefs like Ricard Camarena or Susi Diaz. In addition, we have the opportunity to see their day-to-day work, see how they organize their sessions; we have access to their recipes, test the results and ask questions if we need to”.

Since beginning his studies at the UCH-CEU University, Tadas has not only learnt new techniques and another food culture: “This Bachelor’s Degree is not only about food. The importance that Management has in the Programme has opened my horizons. Here I realised the importance of other disciplines such as Consumer Psychology or Marketing. I learned how to quantify energy and calculate costs in a kitchen “. Tadas considers this is “key” knowledge when starting a business. He also believes that if the opportunity comes in the future “I wouldn’t hesitate to open my own restaurant.”

During the last months, Tadas has had the opportunity to interact with many international students (students from more than 10 different countries study the Official Bachelor’s Degree in Gastronomy): “It’s a very positive experience. You can learn about new cultures, but also from a culinary point of view, you can experience new products and techniques. It’s funny how, for example, we cook some dishes differently but using the same ingredients”.

All these influences have enriched Tadas’ cuisine, which he defines as contemporary, very attached to his homeland (Lithuania), his memories, and permeable to other cultures (Scandinavian, previously and gradually, Mediterranean). A cuisine that culminated in the tasting menu prepared alongside Monte Pacis’ Chef Ernestas Viršilas, on March 4 in the city of Kaunas. As Tadas puts it: A cuisine where “the most important thing is to convey emotions”.

“Going back to the restaurant where I worked before coming to Spain was almost like taking a vacation,” he says. Only this time he came back as the author of a twelve dish tasting menu: “The theme was the changing seasons, and each dish corresponded to a month of the year.”    A twelve step menu that also foreshadowed his personal history, his evolution: “I knew that it was a great opportunity to convey my feelings through my work and I also knew that it would be difficult to experience something quite like this again. That’s why I tried to enjoy every single moment of it “.