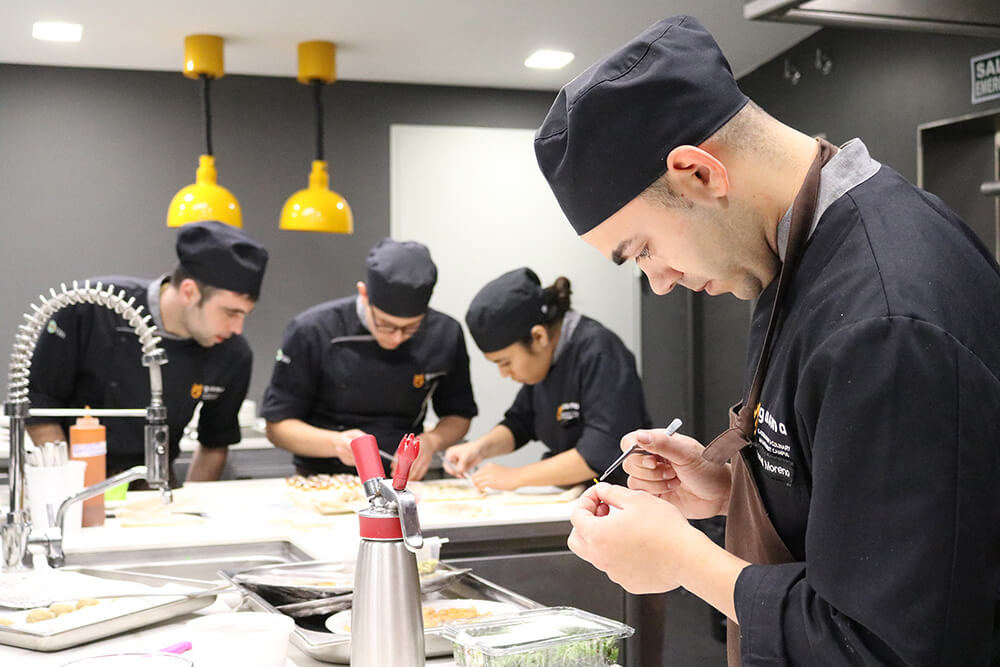 Jorge Lengua and Jaume Tárrega, alumni of the Bachelor´s Degree in Gastronomy, launch La Suculenta, a mediterranean restaurant, which completes its offer in the cocktail bar La Tremenda

They say beginnings always cost. Even more so when a virus appears in the final stretch of the project that paralyzes the world and turns all certainties into uncertainties. They also say that happiness is greater the harder the road has been. And this one has been. However, on July 4th, the restaurant La Suculenta opened its doors in Benicssim, a business and gastronomic adventure that has united Jorge Lengua and Jaume Tárrega, alumni of the Bachelor´s Degree in Gastronomy from Gasma – Universidad CEU Cardenal Herrera.

La Suculenta is, above all, the realization of a dream. “Juame and I had wanted to ride something for a long time and we were clear that it had to be in Benicssim,” says Jorge Lengua. His friendship with Rubén Pons, the third partner of the project and owner of the premises, triggered everything.

The peculiarities of the place (or rather, the locals) led them to devise a pioneering business concept in the area. Succulent isn’t just a restaurant. The catering area occupies the ground floor of the premises, while the basement is transformed into La Tremenda, a renovated nightclub with a careful cocktail offer.

From the first moment Jorge Lengua explains that these are not two independent premises, but complementary. “We were clear that there had to be a continuity between La Suculenta and La Tremenda, and that is something that we have also worked from the point of view of image and communication.” The goal is to offer the diner a global experience that goes beyond the gastronomic offer.

“We look at what happens in cities like London, New York or Lyon and we want to move that concept here and break with the idea of seriousness associated with the good table,” says Jorge Lengua. Thus, the balance between an informal atmosphere and a kitchen and service that meets expectations is also one of the great challenges: “Succulent is informal, but helpful; we want there to be a good atmosphere, but that diners can enjoy the dishes with peace of mind.”

The gastronomic proposal is a sum of the experiences that Jorge has accumulated as a chef during and since his time in the Degree in Gastronomy of Gasma. Not for nothing, his résumé lists names such as Aponiente (3 Michelin stars), where he completed the end-of-degree internships as a member of the R&D team or Ricard Camarena (2 Michelin stars), where he worked as head of departure at the end of his studies..

One element that he shares with Ricard and that is indispensable in this new project is Mediterraneanity. “Saving the distances reflects aspects of the cuisine I learned with it, such as proximity, respect for the garden, for the product and, above all, for the taste,” he says. And that is precisely Jorge’s starting proposal at the head of the cuisine of La Suculenta: “Mediterranean cuisine, very close to the territory and adapted to the most succulent cuisine, the one that you like to eat when you go out to enjoy”.

That mediterranean is enriched in La Suculenta with more travel flavors under the claim ‘Taste the unexpected’. The result is dishes such as tuna tartare with flame aubergine hummus and its own edible embers, a mellow Iberian railing with coconut green curry and Mediterranean herbs, or a roasted monkfish with toasted marcona almond and caramelized galley juice.

The importance of the menu

In a renovated premises of 300 square meters plus terrace (with a total capacity for 143 diners), they work under the menu format (three different plus a special one at noon with rice as the protagonist), menu and suggestions under an average ticket of 35 euros: “On the one hand we promote something as Mediterranean as eating sharing, but we do not want to set aside the menus , because that’s where we can convey everything that’s ” La Suculenta”.

As a result of this commitment to temporality, gastronomic menus change almost daily, so creative freedom multiplies. “We like diners to get in our hands. In advance we tell them the price and the sequence, but we do not tell them what each elaboration is made of, since we play with the temporality and freshness of the ingredients”.

If careful is the culinary offer equally careful is the liquid part of the menu: “We start with 140 references of wine, both national and international, with room for wines such as sweet or generous”. In addition, it is in this section that the synergies between the two premises are evident: Suculenta and Tremenda: “In Spain the world of cocktails linked to gastronomy begins to settle and we want to follow that line too”, concludes Jorge.

Promoting such an ambitious business format has allowed Jorge Lengua and Jaume Tárrega to put into practice much of the knowledge acquired during their time as students of the Degree in Gastronomy. “The passage through Gasma has helped me a lot, as it was based on a very solid theoretical basis to face a project of this size,” says Jorge Lengua.

In this sense, it emphasizes the importance of culinary management as a basic pillar of knowledge in the Degree: “From the first steps of the project we have not only focused on the gastronomic offer, but we have taken care of all aspects that concern a catering business, from the conceptualization of the business itself, to human resources and team management or to the commitment to marketing and communication”.