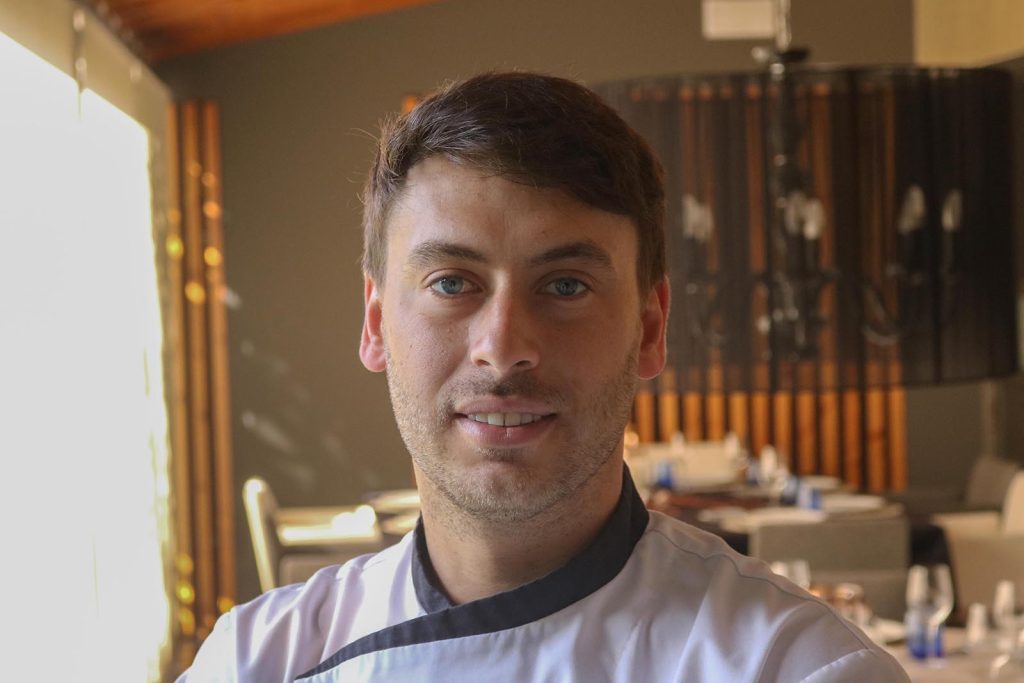 In December 2021, Jorge Lengua, a Gasma graduate in Gastronomy and Culinary Management, received an important boost to his still short career as a chef and gastronomic entrepreneur. The newspaper Levante-EMV awarded him the Young Promise of Valencian cuisine award during the presentation of the guide with the 55 best restaurants in the Comunitat.

Recently, Jorge has returned to Gasma, to the kitchens where he grew up, to share with students of the Gasma – CEU Cardenal Herrera University gastronomy degree his vision of the tapa as the star format of Spanish and Mediterranean cuisine. We took advantage of his visit to tell us what the recognition has meant and to tell us about the keys to successful entrepreneurship in gastronomy.

But first, he tells us about his feelings on returning to Gasma’s kitchens, this time as a teacher: “Returning to Gasma has been to rediscover everything I was, an apprentice obsessed with gastronomy,” he recalls. It has also allowed him to observe that the campus has continued to grow since Jorge was part of the first graduating class of the Gastronomy Degree: “Seeing the positive evolution of Gasma, the level of the current students… the truth is that it has brought back very good memories and has made me feel at home again”.

A period in his career

The recognition granted by the Levante-EMV newspaper came to Jorge just a year and a half after promoting his first gastronomic business: the restaurant La Suculenta in Benicàssim, which we already told you about in this article. Jorge fondly remembers the gala held last December 10 in Valencia: “I can say that it was one of the happiest days of my life”.

Even so, and “although the label of revelation chef weighs heavily”, this recognition has not altered his plans or his day-to-day life. On the contrary, that award served as an impetus to “continue working every day for our clients and striving to maintain a personal line of work, without believing it and without letting ourselves be distracted by this type of award”.

Undoubtedly, part of Jorge’s success at the helm of La Suculenta is due to his personal vision of gastronomy. During his time at Gasma, this former student was immersed in the work of great chefs such as Ricard Camarena and Ángel León during his internships. That experience molded him into a free cook. “To this day, and I’ve been working for almost 8 years now, I’m unable to define my cuisine 100%.” What is clear to him is that “it is a personal cuisine” that drinks from the environment – “it is my main source of inspiration”- and that feeds on local products.

The importance of the cover

An essentially Mediterranean cuisine, with traveling touches, in which the tapa has a hard-earned importance, both in La Suculenta and in Malakaña, a tasca of Andalusian spirit with the tapa as the protagonist. “In both restaurants we always recommend starting with tapas, individual snacks or appetizers.” For Jorge, the most international gastronomic format of Spanish cuisine exemplifies a Mediterranean way of life: “It is synonymous with sharing and enjoyment around food”. So it is not surprising that the tapa has also been the protagonist of the masterclass that Jorge has directed to the second year students of the Degree in Gastronomy.

The adventure of entrepreneurship

One of Gasma’s objectives is to motivate students through the experiences of former students who have successfully ventured into the world of gastronomy. In this sense, Jorge assures that the experience of working in other restaurants reaffirmed his idea of embarking on his own path: “It has always been clear to me that I wanted to develop my own style of cooking, my own rules, both in the kitchen and in life”.

To this end, he believes that the multidisciplinary approach offered by the Gastronomy Degree has been fundamental. “Beyond the kitchen, I have been trained in management, kitchen and team management, nutrition, chemistry, economics and accounting. It has certainly helped me a lot to become the professional that I am and that I can become one day”. However, Jorge believes that making the most of the training opportunities offered by Gasma is also a question of attitude: “My training was very complete because I made the most of the time. Waiting for information is not the same as going for it.

To end the interview, we asked Jorge for some advice for current or future gastronomy students who are thinking about entrepreneurship: “Entrepreneurship changes your life. In my case I can say that, although I have more responsibilities and more work than ever, I enjoy it every day. At the end of the day I do it for my project and for the people I am with. There is nothing nicer than that.