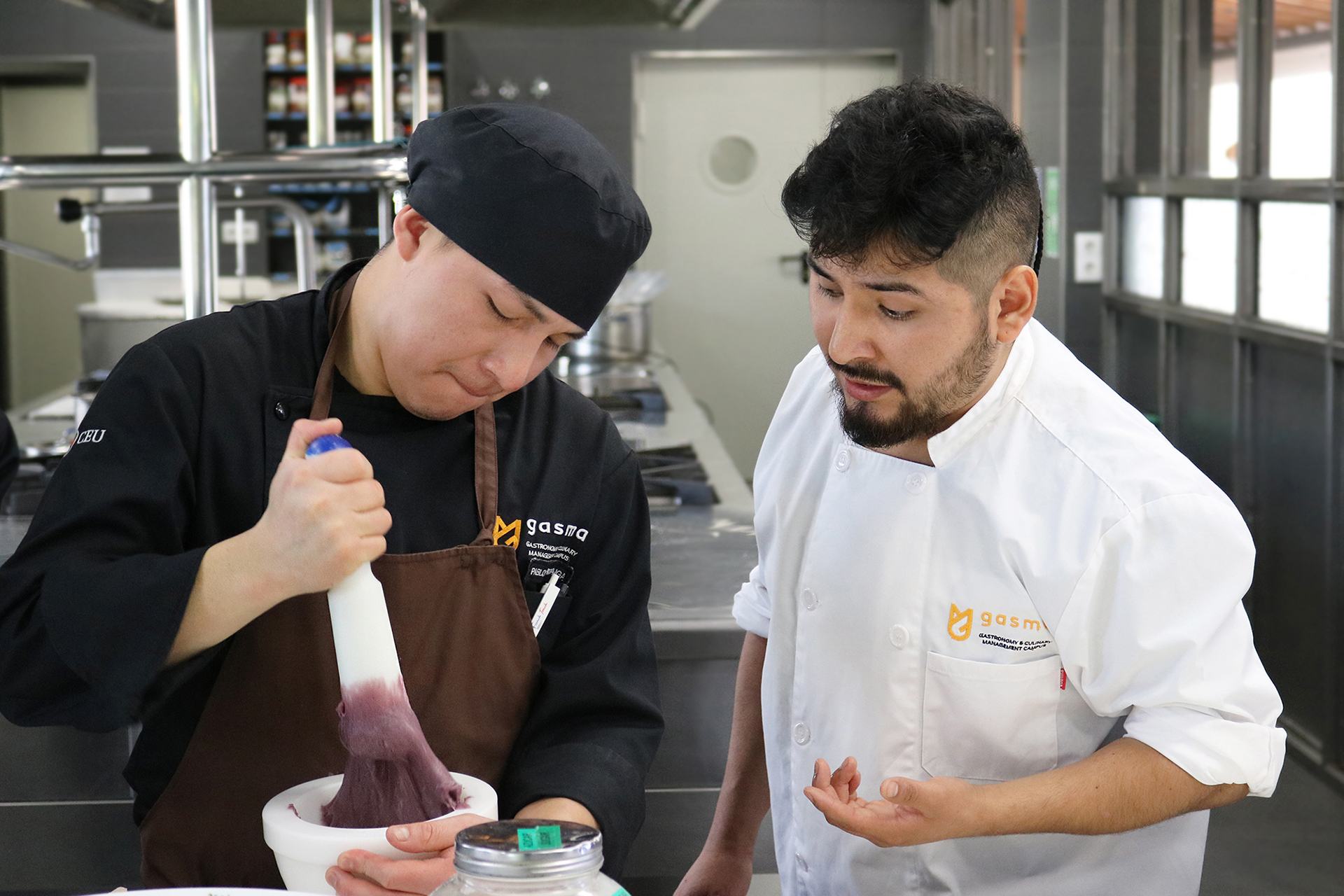 The Future of Gastronomy is Written in Gasma

To achieve as head chef the first Michelin star for a restaurant, conquer criticism and be nominated for one of the most important gastronomic awards in the country, lead a sustainable aquaculture project in a restaurant of high gastronomic value or make the leap to television. The Master’s Degree in Gastronomy and Culinary Management of Gasma has been the accelerator in the career of many young chefs who today direct or participate in some of the most interesting gastronomic projects. Do you want to meet them?

A star in Valladolid

Jhon Mendoza (Italia-Perú) completed the first edition of the Master’s Degree in Gastronomy and Culinary Management of Gasma. He completed his studies in early 2017 and two and a half years later he contributed as head chef at Taller Arzuaga  to the achievement of his first Michelin star. It is an ambitious gastronomic project led by former fashion designer Amaya Arzuaga with chef Víctor Gutiérrez as a gastronomic advisor.

The relationship between Jhon and Victor began precisely in Gasma’s kitchens. Peruvian chef Víctor Gutiérrez was one of the Masters’ teachers and Jhon did not hesitate to choose his restaurant (1 Michelin star) as a place to continue training during his internship. “At the end of the internship I continued to work with him, until he had the confidence to propose to me to be part of the Arzuaga Workshop team as head chef,” Jhon explains. His participation was therefore decisive in the birth of a project attached to the territory, which seeks to reinterpret avant-garde cuisine and which in just one year of life has achieved its first Michelin star.

Candidates for the Revelation Chef Award

Javi Sanz and Juan Sahuquillo (Spain) arrived at the Master’s Degree in Culinary Gastronomy and Management with a scholarship of Ambar Beers under their arm and a clear idea: acquire the necessary knowledge to develop the gastronomic proposal they had always wanted in Cañitas Maite,the family business of one of Gasma’s two alumni. This objective is the one that gave them the energy necessary to combine studies and work, to acquire responsibilities during their internship in two of the best restaurants in Spain (Casa Marcial and Mugaritz, both with 2 Michelin stars) and to finally boost the project of their dreams.

And wow, they’ve done it. In record time they lead a very young team that has managed to place La Manchuela on the gastronomic map of Spain.  For its restaurant regularly defend the best gastronomic critics in the country, its Joselito ham croquette is a candidate for the Best Croquette in the World and they are to the Cook Revelation award of Madrid Fusion. Almost nothing. “The Master’s degree also helped us to be clear that, as cooks, you have to have a very marked, different personality,” they explain. And judging by their résumé, they’ve done it.

Miguel del Valle (Venezuela) arrived in Gasma from Malaga.  “What led me to decide on Gasma over other schools was the formative offer. Both the methodology, the facilities and the range of great professionals who participated in my training were decisive when choosing university.”, he explains. And like Jhon Mendoza, it was direct contact with these chefs who determined their career. Diego Gallegos, chef of the Sollo restaurant  (1 Michelin star), was one of the teachers of the training program. The connection was total and Miguel did not hesitate to return to Malaga and take command of the chef.

After his training he continued to be part of Sollo’s staff and as head chef he was in charge of directing his aquaculture-applied aquapedomy project. Circular economy and gastronomy. R&D&I. “The restaurant menu is based on 70% of what this greenhouse gives us. Obviously, the project has grown over time, with more and more fish species and plant types.” On the importance of the Master’s degree in his career, he sentenced: “Certainly, studying the Master’s degree was a before and after in my professional career. Thanks to this experience I have been able to know how the world of haute cuisine develops from within”.

The face of Buen Provecho (Honduras)

In autumn 2018 Carlos Espinal began his studies in the Master’s Degree in Gastronomy and Culinary Management of Gasma. He thus became the first Honduran to study a gastronomic postgraduate degree in Spain. After completing the program and doing the internship in the restaurant Aponiente by chef Angel León (3 Michelin stars), Carlos has returned to Honduras becoming a media reference (presents the Program Buen Provecho) and with the dream of contributing to the impulse of his country through Gastronomy.

Carlos explains that the Master’s Degree in Gastronomy helped him broaden his horizons: “It is a perfect mix between learning cutting-edge techniques and tools to be able to manage a catering business. All this by the chefs and managers of the best restaurants in the world”. Back in Honduras, Carlos works as a teacher and gastronomic disseminationist with a clear objective: to revolutionize Honduras through gastronomy: “All the experience and knowledge acquired has been fundamental to be able to come and replicate it in my country. That’s my main focus.”

William Gnudy came to the Master’s Degree in Gastronomy and Culinary Management of Gasma from Italy. An Italian who for years has been developing his Atlantic militancy in A Coruña under the orders of chef Iván Domínguez. “It all started in Gasma, where I met Ivan. At the end of the Master’s Degree I went there from my internship at Alborada (1 Michelin star)”. At the time, Ivan was the executive chef of the Alborada group. As part of the chef’s trusted team, William lived first-hand the birth of his new project: NaDo.

“Experience has helped me grow, as I have seen the birth of a restaurant from scratch: designing menus, selecting and dealing with suppliers, creating work systems. It’s been a unique experience that’s definitely going to do me a lot of good.” He also believes that his training in Gasma, with the commitment to management as a cornerstone, allowed him to be prepared for the challenge. Finally, from his experience in Gasma, he emphasizes the coexistence with both his colleagues and with the chefs and teachers who participated in his training: “It is one of the most important things that I take. It allows you to learn from others, not only from teachers, but from other peers, because there are students from several countries you learn a lot. It’s a unique experience.”

If you also feel ready to take the leap and bet on a pioneering training program, ask for information.