Gasma opens the academic year with the presentation of the Official Bachelor’s Degree in Gastronomy.

Last September, 14th CEU Cardenal Herrera University-Gasma started the new academic year 2015/16 and welcomed its new students with the presentation of the Bachelor’s Degree in Gastronomy and Culinary Management. The event was the starting point of a Bachelor’s Degree with a clear international vocation, as called for in the field of haute cuisine.

In a context where Spain has established itself as a global gastronomic trademark and thanks to the hard promotional work of the Bachelor’s Degree beyond our borders, international students at Gasma account for about 50% of the class of 2015/16. Students from countries as diverse as Lithuania, Venezuela, Bulgaria, Kenya, Italy, United Arab Emirates, Ireland, Brazil, Romania, Guatemala, Mexico, Argentina and Spain, start the academic year in Castellón. Because of a high interest of foreign students in the Bachelor’s Degree and the fact that in many regions some entrance exams are still taking place, registration for the Official Bachelor’s Degree of Gastronomy it is still open.

The Opening Ceremony of the academic year 2015/2016 took place in “Villa Dolores”, one of the campuses of the Gastronomy and Culinary Management. Campus. The General Secretary of the CEU Cardenal Herrera University, Mr. José Manuel Amiguet, chaired the presentation event and Mr. Quique Dacosta closed the presentation ceremony. Dacosta, the President of the Advisory Board at Gasma (a board made up of internationally renowned chefs such as Ricard Camarena, Susi Diaz, pastry chef Paco Torreblanca, researcher Purificación García and sommelier Manuela Romeralo) stressed the importance of Gasma as a “catalyst of gastronomic knowledge” and encouraged students to work with dedication. In his own words:  “To be on top you need to invest many hours and much effort. You are a chef 24 hours a day”. At the end of the presentation, students went to the headquarters of the CEU Cardenal Herrera University campus in Castellón to visit the rest of the facilities. 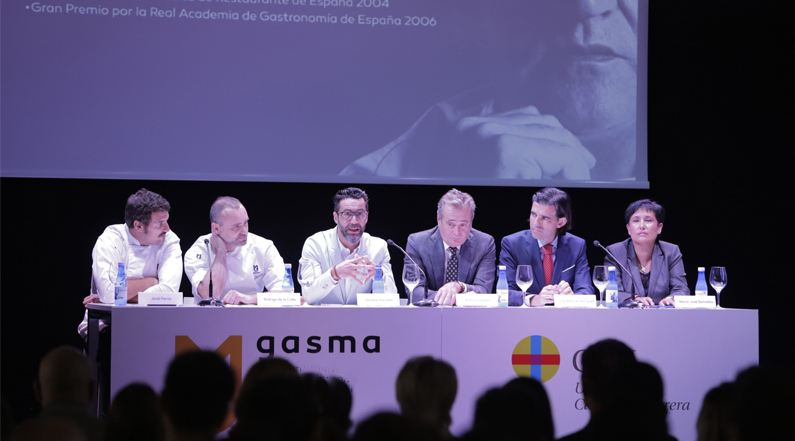 The beginning of the Bachelor’s Degree in Gastronomy also kick-starts the launch of the entire training programme at Gasma for the academic year 2015/16. A programme based on the combination of gastronomy and culinary management that aims to promote training at the highest level among professionals.

The wide range of training offer is complemented with two Master Programmes: ‘Contemporary Master Chef’ and ‘Creation and Management of Catering Companies’, plus eight additional specialization courses around topics such as:

Throughout the academic year, there will be monographic courses aimed for professionals in the hotel and catering industry. In order to do this, Gasma has a teaching board made up of some leading names in both gastronomy and the culinary management field, with names like Oscar Velasco, Estanis Carenzo, Fernando Saenz, Kiko Moya, Rodrigo de la Calle, Miguel Ángel la Cruz, Fernando Arellano, Koldo Royo as well as members of our own Advisory Board at Gasma.