Yasmine El Mekati is from Egypt. Originally, she thought about studying in Germany, alongside her family and friends. At the last minute, she discovered GASMA and even though she did not understand any Spanish, she decided to pursue her dreams and challenge herself by learning a new language and about a new culture. Now she’s on her way to becoming an expert in Gastronomy and Culinary Management here in Spain and she has told us about her experience so far.

What was your favorite childhood dish?

Well, that’s a bit difficult to say. As I remember being a picky eater and not liking all the food my mom would give me. But, when I come to think of it my favorite dish would be “Kofta”, which are Egyptian minced meatballs that can be served with white rice and tomato sauce. I would always ask my mom to prepare it for me in the shape of a mini burger. Also, I loved eating breaded chicken (wiener schnitzel) although it’s not an Egyptian dish, but my mom often used to make it for us.

You come from Egypt, which is a different country with a different culture. How did you make the decision to move to Spain to study in Gastronomy?

To be honest, I wanted to study in Germany first because my brother and friends study there. In the beginning, I was more focused on studying Hotel Management than Gastronomy. But as I kept searching for other options, I came upon GASMA on Facebook and Instagram. I looked it up and liked their study plan. They offer you both options, studying Gastronomy and Management, which for me was the best choice.

At first, I was a bit hesitant because the program stated that the first couple of years were going to be in English and the last two in Spanish, and I came to GASMA not knowing a word of Spanish. I took the challenge because I wanted to learn a new language and learn about a new culture. I’ve chosen to pursue my passion for baking and cooking which started as a kid seeing my mom and grandma in the kitchen and helping them out instead of studying.

How has your experience in Spain been so far?

My experience has been challenging but great at the same time. At first, I had difficulties making friends due to the language barrier, but with time I’ve grown closer to many people and to be honest my character has changed for the better. I have become more independent, more open and confident in the kitchen.

Broadly speaking, what similarities and differences do you find between Spanish and Egyptian food?

Since they are both on the Mediterranean, there are a lot of similarities in the dishes, especially with fish and spices. I would honestly say that Egypt wasn’t as advanced in gastronomy as Spain, and only in the past couple of years has it started to improve and focus more on the high gastronomy. Every day they are starting to use new techniques and elaborations. That’s also another reason why I came to study in Spain. I wanted to learn a lot from the Spanish cuisine and gastronomy in general and be able to apply it to Egyptian cuisine and enhance the gastronomy sector in Egypt.

Which do you prefer, eating or cooking?

I definitely prefer eating, because it brings people together and can be a moment to share with others. But there is still a certain satisfaction I get from eating something I prepared, especially at dinners and events. 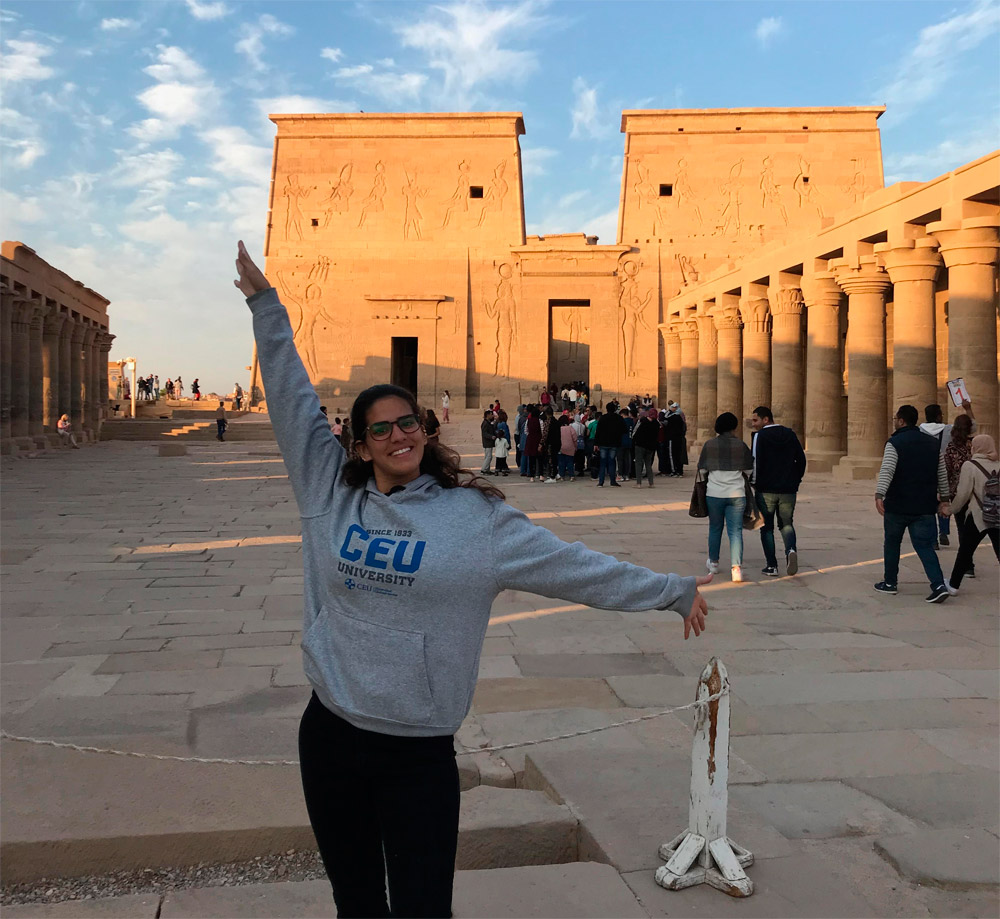 Tell us something about a typical Egyptian dish…

Typical Egyptian dishes are really fatty and filling. The most famous and typical dish for lunch and dinner is the “Koshary”, which contains lentils, white rice, macaroni, chickpeas and spicy tomato garlic sauce. I love eating it every time I go back. Breakfast dishes aren’t that fatty, and they are also delicious.

Another famous dish is falafel. In Egypt, it is prepared with fava beans, which is unlike the Lebanese recipe that is made with chickpeas. This shows again that a lot of the Mediterranean countries are similar in many things. For me, these two dishes and the foul, which is also made of cooked fava beans, are the typical Egyptian dishes. Then, of course, you have all the meat and chicken dishes, which can be served with couscous like they do in Morocco.

Which Egyptian chefs do you admire?

The Egyptian Chef that I admire would have to be Ghada Nawara. She is a humble mother of three and she decided to start her business late after her kids went to college. This gives me hope because it shows you that no matter what you studied or what you do, as long as you follow your passion you can achieve your goals. She started her own catering business just by cooking for her family and friends, and then she became popular. That’s what I hope to achieve in the future, start small, then grow and get more known in Egypt.

You have done internships under the management of the El Barri Group of Albert Adrià. What has been your experience there? What have you learned?

My experience was completely different from what I have experienced in other places before. It opened my eyes to the future and how it would be working in a kitchen and being the pastry chef of a restaurant. To be honest, it was a bit intense at the beginning, too many hours and a lot of work, but I got used to it and loved it at the end. I had to learn so many new techniques and apply what I have learned from GASMA to my Internship. I got the opportunity to work next to one of the best pastry chefs and of course, Albert Adrià.

Most importantly I learned how to work fast and efficiently in the kitchen. The atmosphere was amazing, everyone was super friendly with me, and attending to any doubts, I had regarding a recipe or an elaboration.

“I got the opportunity to work next to one of the best pastry chefs and of course, Albert Adrià”

Which area of gastronomy would you like to lead your professional future?

In the future, I would hopefully like to work in the management of a restaurant of F&B department in a hotel. Obviously, I need to work in the kitchen first for a couple of years to gain more experience inside the kitchen and learn how to manage it all, so I can learn how to manage it from the outside, already understanding how everything works. Then hopefully in the long future, I would like to have my own gastronomic business whether it’s a small restaurant or a pastry shop.

Thank you, Yasmine, for sharing your experience and your professional dreams with us! We’re glad you feel comfortable in Spain and that you have so many future goals. We look forward to watching you achieve them!